Making chicken bone broth is a snap in the pressure cooker (Instant Pot)! No more 24 hour slow cooker or stovetop! 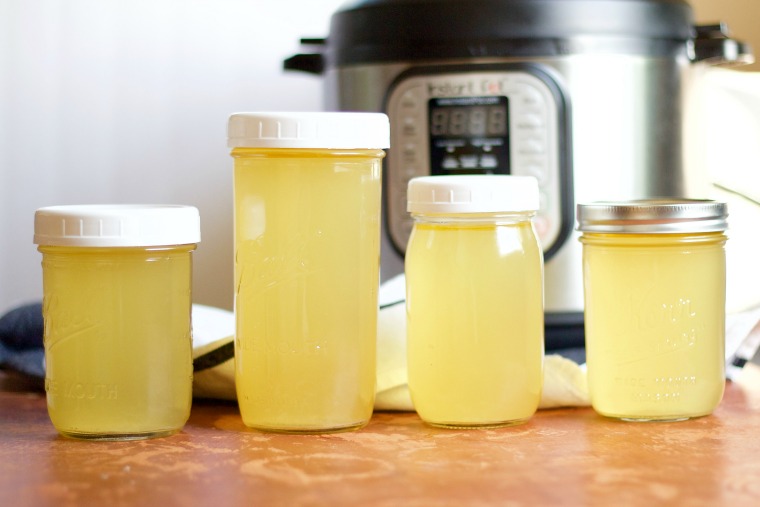 I use a lot of chicken broth and even though it’s convenient, buying containers of it was anywhere from $2.50-$5.00 a pop – and sometimes you only need a splash, and then you open this huge box for nothing and then it sits for a little too long to keep you comfortable, and you toss it… I made my own for a little while from chicken breasts in the slow cooker, but realized then I had three pounds of shredded chicken I needed to figure out how to eat. The most effective way to make broth is with the leftovers! 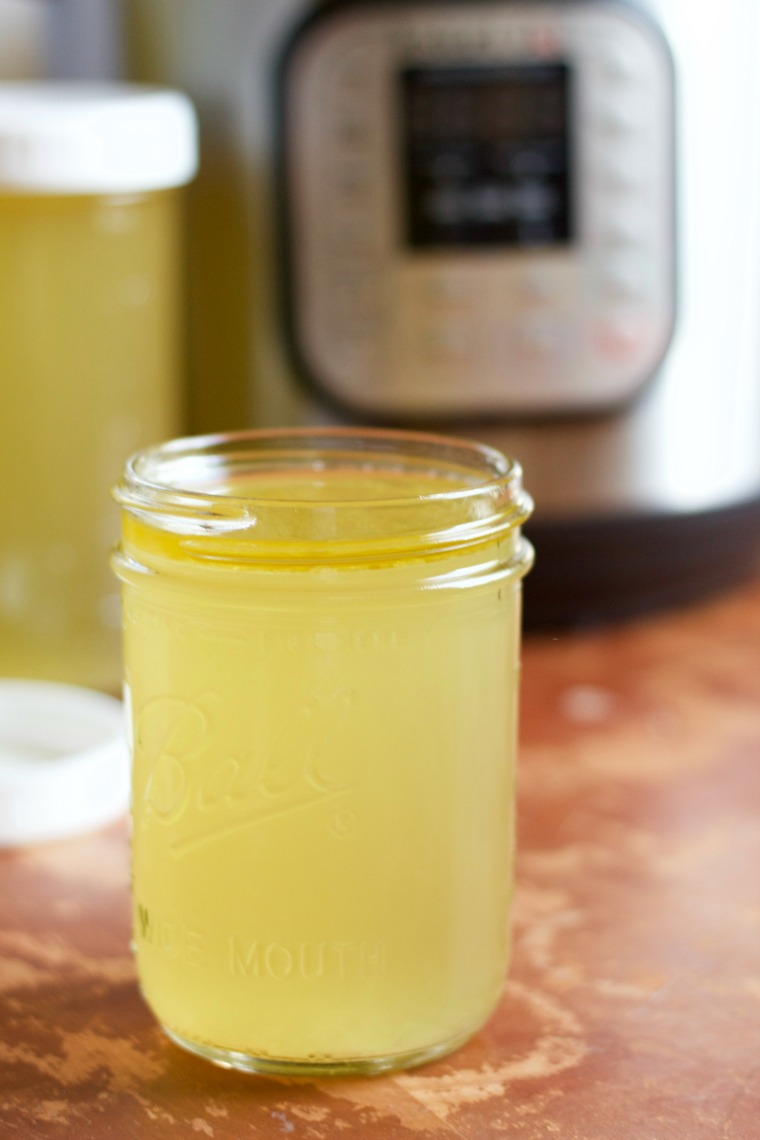 Now, there is a craze about “bone broth” right now. It is basically broth that has also released all the goodness like gelatin and collagen from the bones into the broth. This will result in your broth being cloudy upon cooling. This is normal and means it’s good! I made a true bone broth for the first time when I followed this recipe from glebekitchen for tonkotsu ramen pork broth. It involves 12 hours of a rolling boil on the stove…and it was incredible. But…ain’t nobody got time for that when you’re trying to turn out lots of broth to store! (No offense, Romain!) That’s how I knew I was doing the right thing when my chicken broth was also cloudy like his pork broth was. All the goodness was coming out! Disclaimer: I’m not exactly on the “super health” train. So I won’t probably be able to answer all your questions about your chicken broth (its consistency, etc.)…but it will be tasty, and that’s all I can promise…Sometimes mine gels all the way, and sometimes it doesn’t. I think it probably would if I cooked off more of the liquid for a more concentrated option.

This method isn’t as speedy as something you might throw in the Instant Pot for dinner, (all the liquid makes it take a while to heat and pressure up), but it certainly beats 12 or 24 hours! I also throw in stuff I keep in a “broth bag” in the freezer – onion ends and skins, floppy celery or carrots, celery crowns – for extra flavor. I do not salt the broth, so I just let the recipe do that. When it is finished cooking, I actually use a fine mesh bag (affiliate link – its advertised purpose is for making almond milk). It does stain the bag and makes it smell like broth forever, so I have a designated one for bone broth making. This is actually the first thing I tried in my Instant Pot, because I had been waiting for it to come in so I could use the chicken bones I had been sitting on! (My slow cooker’s stoneware cracked and I haven’t replaced it…so I’ve been out a slow cooker for a few months now.) Need an Instant Pot? I got this one, and it holds my 3 lb chicken carcass well! (affiliate link). 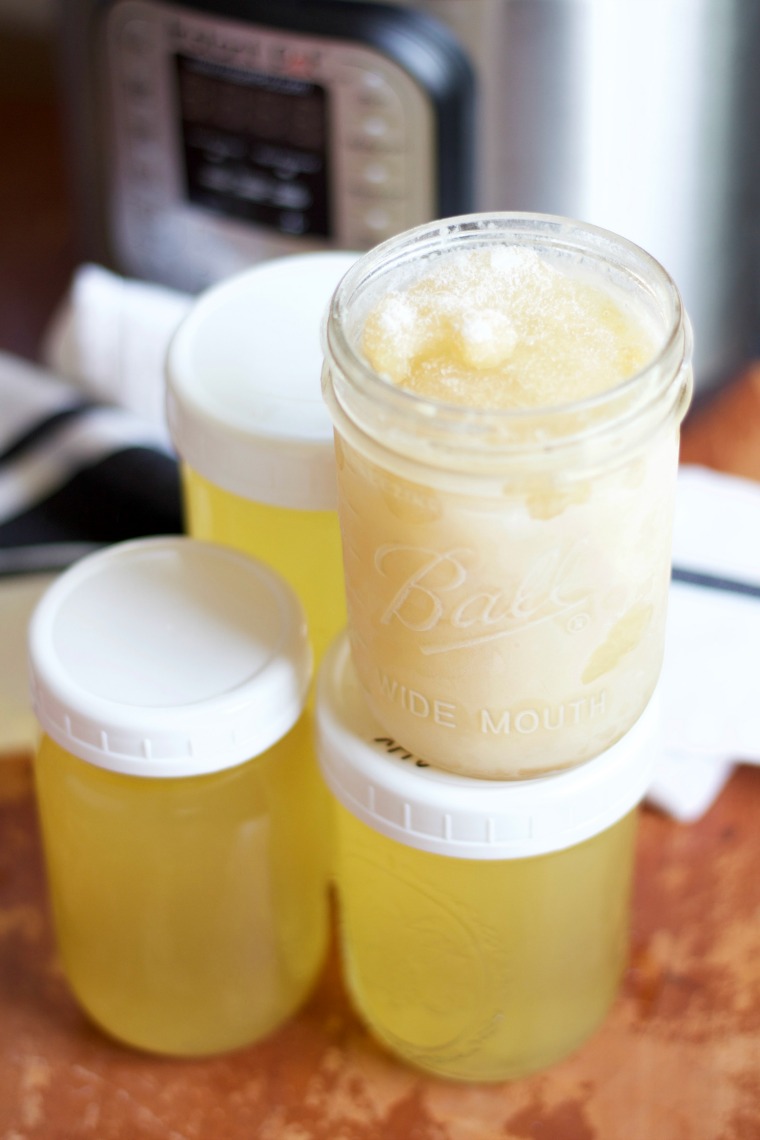 Here is a shot of what it looks like when it’s frozen. Leave some space, because it will expand.

Local Spotlight: My chicken bones actually came as an entire carcass from 413 Farms. She gave me a great deal, and so I bought 3 chickens worth of bones for $15, which has the potential to make over a gallon of chicken broth! Angie’s chickens are happy and organic!

Save some money, make healthier and local-er bone broth in your very own home – it’s a win-win-win! 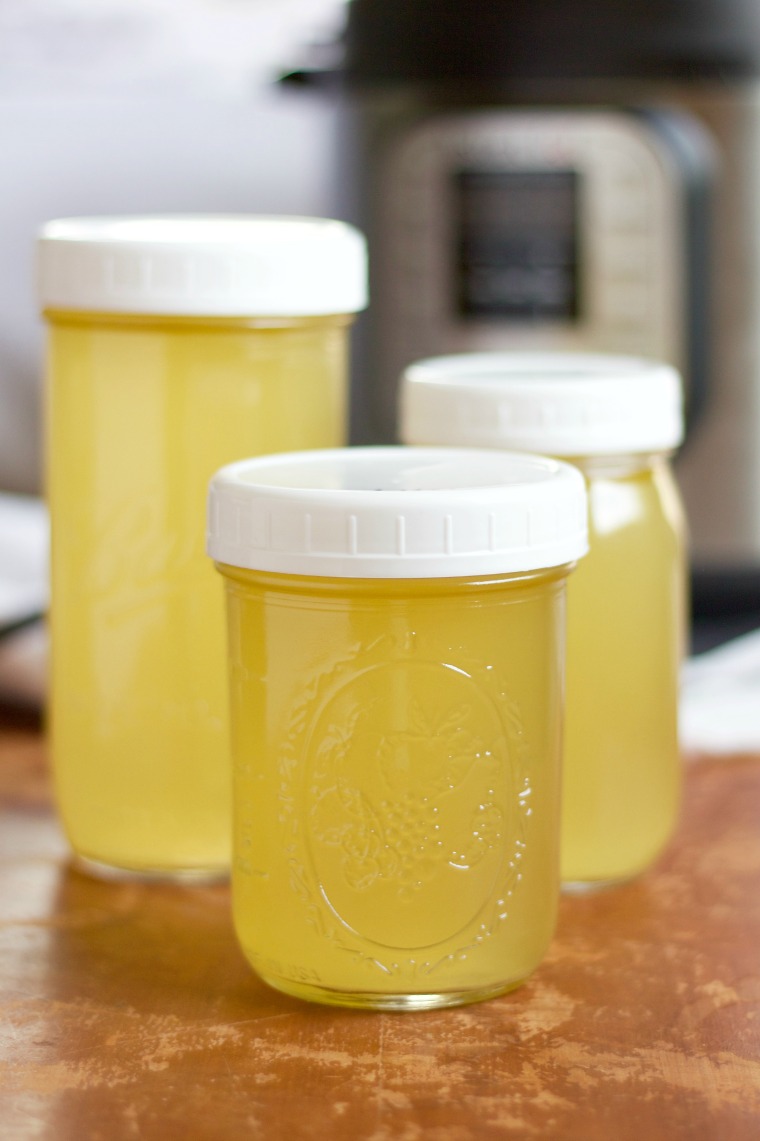 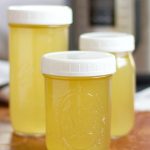 Making chicken bone broth is a snap in the pressure cooker (Instant Pot)! No more 24 hour slow cooker or stovetop!

You can refrigerate the broth so that the fat will harden on the top for easy skimming before putting in the freezer.